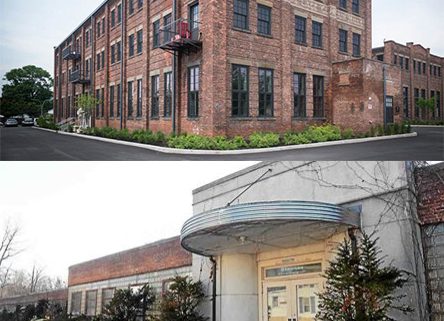 The Lace Mill: Collaborative Catalyst
“From the Lost Generation to Andy Warhol’s Factory, from the painters of La Belle Epoque to the Beats, history shows that when a few artists have the space and opportunity to inspire and collaborate they will have an outsize effect on the community around them. Whatever the types of makers involved, small creative collectives can be powerful catalysts for social evolution and technological innovation. RUPCO’s Lace Mill project in Kingston was designed to create just this kind of synergy.” – excerpt from Chronogram’s “Collaborative Catalyst” in the February issue.

Read the interviews with architect Scott Dutton; RUPCO’s Guy Kempe; and artists Chelsea Culpepper, Aaron Lockhart, Daniel Cardenas, Felix Olivieri and Lynette Hughes. Then view the companion slide show for a peek at The Lace Mill’s live/work spaces. All in the February issue of Chronogram.

The Metro: A Mixed Commercial Use Project
“The Metro, a planned mixed commercial use project in a vacant former South Prospect Street furniture factory, is a unique endeavor by a city-based affordable housing provider. Inside the 70,000 square-foot-building, RUPCO plans its first complex minus a usual component: actual housing.

“… The Metro, which is expected to house a TV/film-making production center headed up by actress Mary Stuart Masterson, is a building preservation effort as well as a community reinvigoration endeavor. Both are core, RUPCO says, to its overall mission and part-and-parcel of The Metro complex.” – excerpt from Daily Freeman’s “The Metro, a mixed commercial use project, is different kind of RUPCO endeavor, in the 02.12.17 issue.