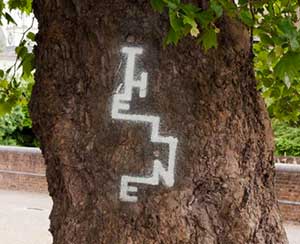 Here’s a good example of branding and the supporting visual design system.

The Beautiful Meme has created the identity for The Line – a new art walk in east London that links the 02 and the Queen Elizabeth Olympic Park.

The walk includes a series of sculptures by artists including Damien Hirst, Martin Creed, Gary Hume and Eduardo Paolozzi.

There are nine initial sculptures on The Line, which were chosen by a panel including artist Mark Wallinger, art critic Richard Cork and The Line co-founder Megan Piper.

The Line is set up as a community interest company – supported by fundraising – and has been co-founded by art dealer Piper and urban regeneration expert Clive Dutton.

The Beautiful Meme says the starting point for the identity was the idea of journeying through the landscape.