The Samuel Dorsky Museum of Art at SUNY New Paltz is proud to present “Benjamin Wigfall & Communications Village,” an exhibition of work by the influential artist and educator Benjamin Wigfall (1930-2017) that opens Sept. 10, 2022.

This exhibition provides the first retrospective of Benjamin Wigfall’s art from his early career in Virginia in the 1950s and his academic art studies at Hampton Institute, Iowa State University, and Yale University to his founding of Communications Village, a community space for art-making and mentorship, in Kingston, New York, from 1972 to the early 1980s. Wigfall was a revered Professor of Printmaking at SUNY New Paltz, who taught from 1963 to 1991.

Primarily categorized as an abstract artist, Wigfall nonetheless took inspiration from ordinary things around him. His upbringing and education in a segregated Richmond, Virginia, deeply informed his decision to address the inequities of access to art education.

“Benjamin Wigfall & Communications Village” will be on view from Sept. 10 – Dec. 11 in The Dorsky’s Morgan Anderson Gallery and Howard Greenberg Family Gallery. Curated by Dr. Drew Thompson, Associate Professor of Visual Studies and Black Culture at Bard Graduate Center, and Dr. Sarah Eckhardt, Associate Curator of Modern and Contemporary Art at the Virginia Museum of Fine Arts (VMFA), the exhibition will travel to VMFA in Richmond in the spring of 2023.

Use this link for more information on “Benjamin Wigfall & Communications Village.”

“Benjamin Wigfall & Communications Village” primarily examines the artist’s life and work and reveals the role of art education and printmaking in the technical training and evolution of Wigfall as an artist. It also explores printmaking as an important form of art production and community engagement for 20th-century Black American artists and the communities with which they worked. Printmaking was formative to how Wigfall and many of his Black contemporaries met each other and situated themselves within and in relation to an American art world that provided Black artists with few educational and exhibition opportunities.

Like his Black contemporaries, Wigfall pursued a career as a university professor, first at Hampton Institute and then at SUNY New Paltz. Wigfall’s larger body of works and these educational experiences laid the technical and conceptual foundation for Communications Village and the creative exchange that invited influential Black artists to experiment with printmaking.

“Both Benjamin Wigfall and Communications Village are forgotten elements in the history of printmaking and community arts initiatives,” said Thompson, who was selected by the Dorsky Museum in a juried process to curate the exhibition. “Wigfall’s life as an artist and arts educator exemplifies the power of the social practice of printmaking. Sharing Wigfall’s art, and telling the story of Communications Village, introduce wonderful spaces to (re-)engage communities, many of the very same ones that Wigfall served, in this unique and important history.”

The exhibition opens with a survey of Wigfall’s works from 1951 through the early 1980s. This display of paintings, assemblages, and prints illuminates Wigfall’s unique educational trajectory from Hampton Institute to Yale University and the varied influences on his work, including the techniques imparted by his instructors, such as Leo Katz and Gabor Peterdi, and his own experimentation with figuration, abstraction, and text. Scientific concepts such as weights, friction, tension, and bombardment animate his work during this period, embodying his experimentation with form and color, dabbling in figuration, and an embracing of what he called “audiographic expression,” the exchange between text and sound.

“In the nearly 90 years since VMFA was founded, I cannot think of another artist whose story weaves so consistently through the warp and weft of both the museum’s acquisition program and educational mission. It is a privilege to work with the Samuel Dorsky Museum of Art to connect the different aspects of Benjamin Wigfall’s life and work from his early years in Virginia to his career in New Paltz and Kingston, New York,” said Eckhardt. “Telling the story of how Wigfall came to the art of printmaking helps visitors to understand his evolution and impact as an artist in addition to the deeply personal lived experiences that led him to create Communications Village.”

In 1973, Wigfall bought and renovated an old brick-built livery stable in Ponckhockie, a working-class Black American neighborhood in Kingston, New York. Originally, he intended it to be his private studio away from school and home. Instead, Wigfall opened his doors to curious local teenagers, and for the next 10 years dedicated the building to the community’s youth. He named the space “Communications Village,” where young people learned printmaking, photography, poetry, the recording of oral history, and survival skills such as casual conversations, car driving, cooking, and fence building—all of which were presented as forms of communication. Wigfall also engaged many prominent Black American artists to come to Communications Village and work with the community, sharing their experiences and skills. Participating artists included Benny Andrews, Romare Bearden, Robert Blackburn, Betty Blayton, Ernest Crichlow, Jayne Cortez, Melvin Edwards, Ernest Frazier, Charles Gaines, Mavis Pusey, and Everett Winrow. He also invited members of the SUNY New Paltz art community, including Diane Hunt, Pat Jow Kagemoto, Mary Lou Morgan, Joseph Ramos, and Rose Tripoli.

To tell the story and impact of Communications Village, the exhibition’s second and third parts bring together for the first time works by invited artists and, where possible, the specific prints they produced in residence. This showcasing and juxtaposition of varied media highlights Black artists’ own experimentation with form, figuration, and abstraction through printmaking and the experiences of youth who helped to make the prints. Accompanying these displays will be photographs and personal ephemera associated with Wigfall’s life and Communications Village. In 1977, Wigfall explained his motivations as an artist and art educator with the question, “How can I best utilize me?” That statement was key to his vision of art as a form of education and empowerment vital to the individual and the community as a whole.

“Benjamin Wigfall & Communications Village” is organized by the Samuel Dorsky Museum of Art in partnership with the Virginia Museum of Fine Arts. 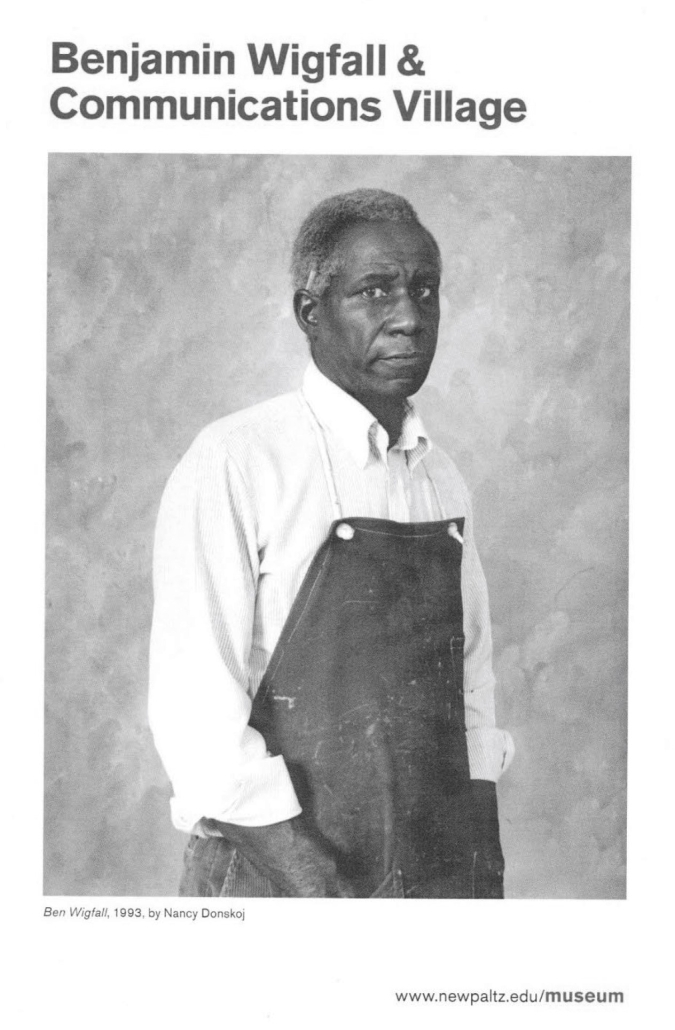 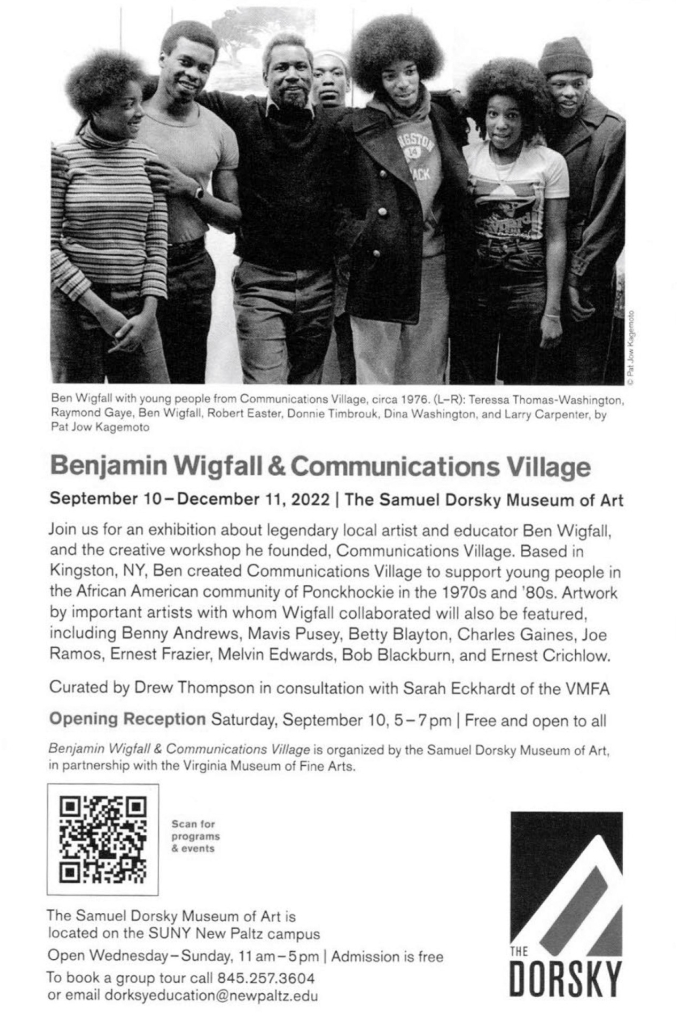