Lara Giordano is still putting the finishing touches on the renovation of 626 Broadway, but already the storefront has been a hive of creative activity. Her Department of Regional Art Workers, or D.R.A.W., as she has named the new community art space, has hosted printmaking and comic-book writing workshops for half a dozen middle schoolers.

More classes were about to commence: an experimental printmaking workshop was scheduled the week of July 24 and a five-day stop-motion animation class will begin August 7. Every Saturday afternoon, a live drawing session featuring costumed models—one was dressed as Dead Pool, a character from Marvel comics; another chose Japanese anime—attracts a group of high school students (it is open to anyone age 14 or older). The drawing class is supplied with benches, drawing boards, newsprint and charcoal. D.R.A.W. offers the classes on a pay-as-you-can basis (the suggested fee for the life-drawing class is $10).

Ultimately, “I’d like to have D.R.A.W. be a partnership between the city, schools and businesses,” said Giordano, who also founded and manages PUGG (Pop Up Gallery Group), an exhibition space located next door. Help is arriving from all quarters: the landlord, Ed Kang, offered the two spaces for free, the high school has contributed some funds, and Women’s Studio Workshop has donated an intaglio press, which occupies the back room of D.R.A.W.

PUGG was launched two years with funds from a HUD grant (matched by dollars supplied by Kingston High School (KHS) and local businesses). The money funded a paid work-study program designed to teach arts management to high school students. Kids involved with PUGG worked with Riley Johndonnell, whose UMEWE Optimism in Action think tank is located a couple doors down, on his public art projects, including the installation of eye-catching yellow circles on the grounds of City Hall. David Schell, owner of Green Kill art gallery, also lent his expertise to the youth.

PUGG exhibits work by high school students as well as alumni from the KHS art program—a group of working artists and visual arts professionals who work closely with Giordano on programming. D.R.A.W. was born out of their desire for a space in which they could hone their skills, while at the same time providing a creative art space for the community. The alumni work with local youth at PUGG and D.R.A.W., helping them publicize, curate, hang work, and do the catering for the openings of the exhibitions. The community arts initiative is expanding, with the donation of a 1,000-square-foot space, located above the Just For You restaurant, by the building owner. A show of work by an alumni artist is planned for the space, curated by the paid PUGG student participants.

“It’s a synergy that’s naturally happening,” Giordano said. The key to that synergy is “building on the assets that already exist,” she added. As a teacher at KHS for 30 years, Giordano is uniquely positioned to tap into those assets—and will sometimes race out onto the sidewalk to buttonhole a young person she recognizes who happens to be walking by. That connection and devotion to engaging and developing the creative assets of people in the community is in the spirit of the Communications Village, a printmaking shop in Ponckhockie founded by SUNY New Paltz art professor Ben Wigfall in the 1970s. (As it happens, Patty Tyroll, who hosted one of the D.R.A.W. printmaking workshops, was a student of Wigfall’s at SUNY New Paltz.)

Giordano’s group of volunteers is inspiring novel new uses for D.R.A.W. as well. Artist Kelli Sillik, who works at R&F Handmade Paints, lives in a very small apartment and was stymied from showing her work to an interested curator—until she came up with the idea of using D.R.A.W. as a private exhibition space. A reading of a Sam Shepard play has been proposed. Another artist plans to host an Artists Survival Skills workshop. “How you manage to maintain your creative spirit, while working for a living,” along with mastering basic skills, is a particular focus of D.R.A.W., said Giordano.

This is a seed that has already sprouted—and it’s poised to blossom, helping transform the Broadway corridor into a people-friendly place full of creative delights.

The last dollars from the HUD grant were spent in July, so Giordano is soliciting support from the city along with the schools, local businesses and residents. If you have a donation or would like to help, contact Lara Giordano at larag2@mac.com. 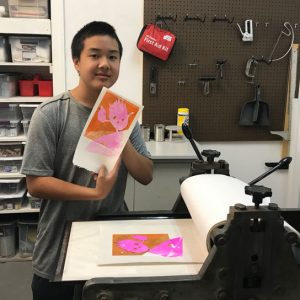 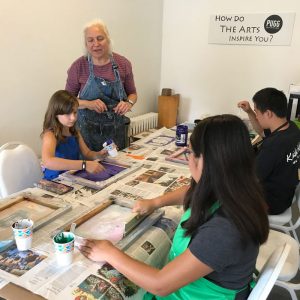