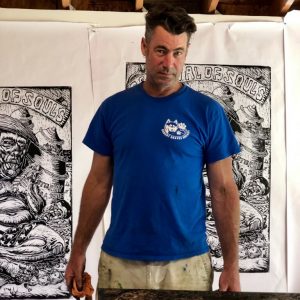 When did you first know you were an artist who wanted to teach art?
When I was in grad school in Philadelphia, I had an opportunity to assist in an art class for local high school students. It was a gratifying experience, and one that I enjoyed.

Favorite medium(s) you use to make – and teach – art.
I’m primarily a painter and woodcut printmaker, but also incorporate drawing heavily into my practice because it’s the foundation of everything.

What are the most interesting new trends in your field? Is your teaching changing as a result?
The commercial art world increasingly favors manufactured art that is mass produced by fabricators. It’s not a trend I find particularly interesting but one that drives the art market’s need for “commodity.” I tend to be more interested in work where there is a clear path the artist’s hand has taken, and where decisions have been won or lost over the surface of the piece. This, to me, gives it a unique power as being indicative (or map like) of a series of artistic decisions established by the work.

I’m also encouraged that in the age of media white noise, television, film and digital, painting or image making in general still has the ability to upset people. 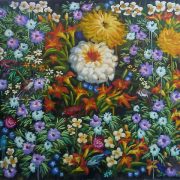 Talk about your teaching philosophy and how you work with students. Who was your most influential mentor and why?
I tend to focus on fundamental things that I know can be taught, for instance how to move space around in a drawing, the importance of edge, value, and similar nuts and bolts things that, whether you end up using them in your own work or not, are important to know and form the historical basis for image making. I’ve had several teachers that were good at hammering these things into my head, notably Scott Noel, Al Gury and my mother!

What are you teaching now? Do you teach at other places besides at D.R.A.W. workshops?
As students develop, I try to get them to see what they do well naturally and encourage them, while introducing them to concepts that they may not readily understand and are less obvious.

I teach a kind of catch-all combination class for D.R.A.W. that is both drawing and an introduction to painting. Some students come in as novices; others have significant training.

I’m also scheduled to teach an introduction to oil painting class for Rhinebeck Artist’s Shop in Kingston starting in October.

How has teaching enhanced/inspired your work as an artist? What do you like best about being involved with The D.R.A.W.?
Any time you teach you learn a lot because teaching forces you to constantly re-think what you know and translate that into a concrete form that someone else can understand. The experience is energizing and particularly rewarding when a student has a “Eureka” moment with their own work that you in some degree were able to help facilitate. 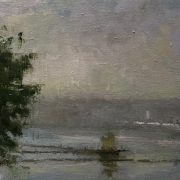 I became acquainted with D.R.A.W. from a pamphlet I picked up at a coffee shop. I responded immediately to the idea of empowering teaching artists, like a WPA idea from the 30’s. I greatly respect the work that Lara and JoAnna do with kids’ programing, P.U.G.G., as well as mentoring older students who are considering going into art as a “career.” I see how hard they have worked to get this project off the ground and I’m proud to be a part of their growing programming: I am always thankful for the opportunity to teach.

Do you show/sell your art in galleries? Local or elsewhere?
I currently have a show opening at Catholic University in Washington, D.C. that will run through November 1, and I will show there again in February as part of a figurative show. I recently participated in shows at Green Kill Gallery and at Kingston Artists Collective.

In October 2020, at Green Kill Gallery in Kingston I’m curating and participating in a show of artists with ties to Washington, D.C. that I’m very excited about. It will feature the work of Rob Hite, Bill Hill, John Figura and Tim Vermulen, as well as my own work.