Painter and printmaker Benjamin Wigfall was a forerunner of the contemporary Black Arts Movement, which came to be in the 1960s and 1970s to reflect pride in African-American history and culture. When Wigfall died in 2017, his expansive legacy had also grown to include accomplishments as a pioneering college professor, community educator and gallery owner. Innovatively he integrated three of these roles in the 1970s and 80s at his print studio here in Kingston, which grew to become the dynamic art center he called Communications Village. In this learning laboratory, Wigfall brought together local residents and artists, his SUNY-New Paltz students and colleagues, and many of his fellow nationally renowned artists.

Exhibit Events at The Kingston Center of SUNY Ulster 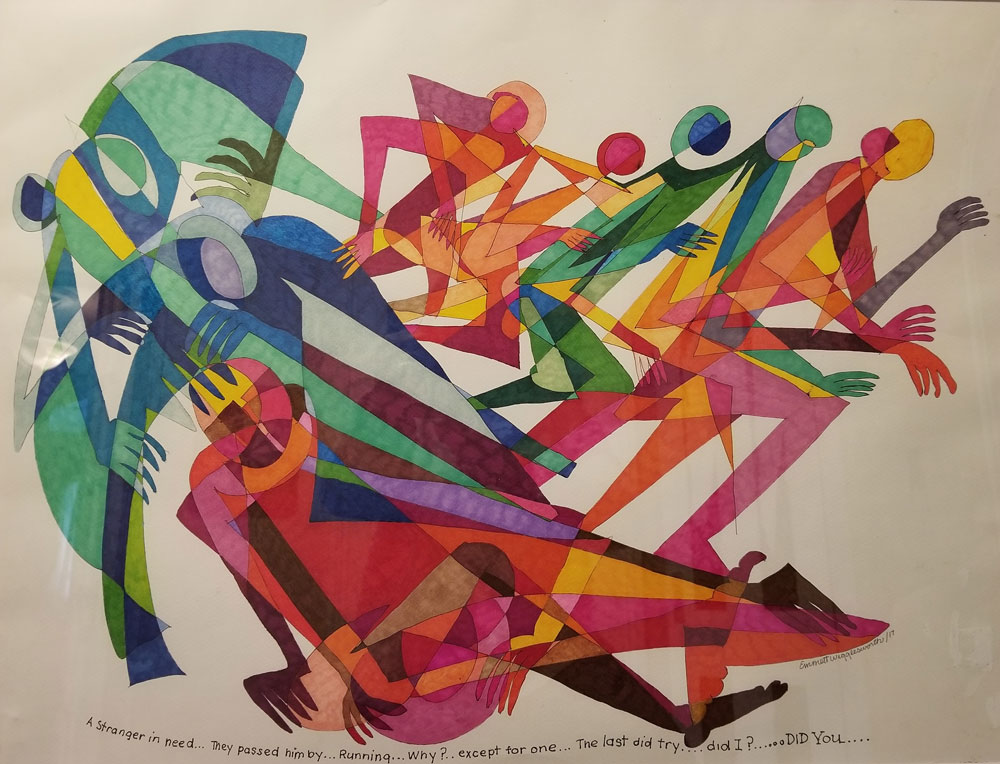 “A Stranger in Need”
Emmett Wigglesworth
Ink on Paper, 2017

“Before the Black Arts Movement of the 20th century, the arts canon lacked diversity and the ability to express ideas from the point of view of racial and ethnic minorities, which was not valued by the mainstream at the time,” noted Greer Smith, president of TRANSART & Cultural Services, which is based near Kingston in West Park, NY. “This exhibit acknowledges the impact that Professor Wigfall had as one of the precursors to the movement, by showcasing several of its movers who came into prominence during one of the most pivotal times in our nation’s history.”

“The community at large has always benefited from the presentation of fine art,” Smith continues. “Wigfall’s story from his beginnings in the South to his ultimate move to the North mirrors the experience of people of color in the community we serve. Aligning his story with his contemporaries paints a clear picture of what success looks like and what art is for people who have been marginalized anywhere.”

In 1951, Benjamin Wigfall gained his first acclaim while only 21 years old and a student at the Hampton Institute. A prestigious jury (which included the noted modernist painter Stuart Davis) unanimously selected his oil painting, “Chimneys,” for first prize in an exhibition of Virginia artists: The Virginia Museum of Fine Arts acquired the painting, making Wigfall the youngest artist to have a work enter the museum’s permanent collection. “Chimneys” interprets the billowing smokestacks that he walked past daily getting to and from high school in his hometown of Richmond.

While a student, Wigfall also began his civil rights activism. After graduating from Hampton and earning a Master’s in Fine Arts from Yale University, he was eventually hired in 1963 to teach art at SUNY New Paltz, where he was also the university’s first African-American professor. Incorporating both his faculty colleagues and students into Communications Village was typical of the inventive and beloved professor, who taught at SUNY New Paltz until 1991.

For more than twenty years beginning in 1988, Wigfall also operated the Watermark Cargo gallery in Kingston, where he specialized in African and contemporary art. There, Wigfall showcased works by some of the nation’s most respected artists, many of whom emerged in the Black Arts Movement and also participated in his Communications Village project. The gallery’s absence is strongly felt today in the region, and was a further impetus for the exhibit.

“It’s very timely to honor the efforts of a creative activist like Benjamin Wigfall and to acknowledge artist organizations such as Afri-Cobra in Chicago and the Weusi Collective in New York City which grew from the Black Arts Movement. Right now there are so few artists of color presenting their work in Mid-Hudson Valley galleries, that it leads to the mistaken belief there are few artists of color in our region,” observed Smith. “More broadly, minority residents in general and African Americans, in particular, have been severely underrepresented in the arts conversation around this region, due to historic practices and the socio-economic dynamics that exist here.”

“Restoring Pride in Culture: Legacy and Tradition” is made possible in part through support from the County of Ulster’s Cultural Services & Promotion Fund administered by Arts Mid-Hudson, and from SUNY Ulster @ Kingston Center.

TRANSART uses the transformative power of art to advance and preserve the history, popular culture and art of peoples of African ancestry, and to cultivate local communities where all voices are heard, understood and valued. The non-profit provides cultural educational programming, exhibitions, performances and information services to a diverse audience in New York State’s Mid-Hudson Valley, including its signature annual performance event Jazz in the Valley. Moreover, TRANSART is committed to the conservation and presentation of cultural programs and artifacts of African cultural heritage and is dedicated to the inclusion of artists of color in the region’s artistic community and conversation. Visit http://www.transartinc.org for more information.