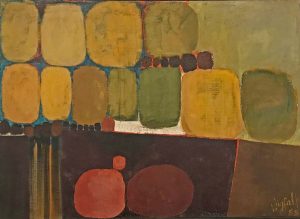 The late Ben Wigfall is most remembered in Kingston for two things: his profound influence on the youth in the Ponckhockie community through his Communications Village in the 1970s and 80s and his elegant and innovative Watermark/Cargo Gallery in the Rondout that existed for about 20 years, starting in 1988. The exhibits in his gallery juxtaposed superb African art with the work of contemporary artists from around the world.

What he seldom exhibited was his own highly accomplished art. A Yale MFA, Ben was a rising star in the art world of the 1950s and 60s as both a brilliant printmaker and painter. Yet, although he continued his own work, he never pursued a career as an artist. While many of his friends became famous – Mel Edwards, Romare Bearden, Bob Blackburn and Benny Andrews to name a few – Ben saw himself as an educator. The first African-American faculty member at SUNY New Paltz,

he was a revered professor of printmaking for 30 years.

This month, an exhibit at the idea garden, Ben Wigfall: the Artist Revealed, pays homage to the concept of the Watermark/Cargo Gallery in a historic show that juxtaposes artifacts from Ben’s stunning African collection with his own rarely seen prints and paintings. The prints range in technique from woodcut to relief printing to etching. The subject matter for many of them is statements and sayings, some in remembrance of his father, that bridge visual art with oral history, harkening back, perhaps, to the African tradition of griot, or story-telling. Included in the exhibit will be an excerpt from a video by Sarah Carlson on Ben’s life and his effect on people’s lives.

This is the first of what will be further exhibitions of Ben’s work and collection in a collaboration between Harambee, The A.J. Williams-Myers African Roots Library, and the Midtown Arts District to bring long overdue prominence to one of the great figures of Kingston and beyond.

Ben Wigfall: the Artist Revealed: An exhibition of work by Ben Wigfall, tribal sculptures from his collection, and a loop of a short film about Ben and his Communications Village created by Sarah Carlson.

Throughout the entire month of February, Black History Month Kingston is happening just about everywhere throughout the city.

Five art shows in four locations have been curated to celebrate 400 years of African presence in America.

East Gallery: A memorial tribute to the late Claurice Fuller with works from private collectors.

Center for Creative Education – The 400 Years Art Show continues on the first floor with art from CCE students on the second floor.

the idea garden – A collection of works by the late Ben Wigfall.

The full schedule of events is printed on the MAD 1st Saturday Map (pick up your copy at participating galleries/other Kingston locations or download a printable copy here) or view all event details here: mykingstonkids.com/bhmk.