Sojourner Truth: Her Inspiration Lives On

Kingston Midtown Arts District (MAD) was one of the proud sponsors of Black History Month Kingston. This month-long celebration included dozens of special events all over town with something for everyone. Special recognition goes to MAD board member Frank Waters, founder of My Kingston Kids, and Tyrone Wilson, previous Harambee executive director, and their legions of volunteers. 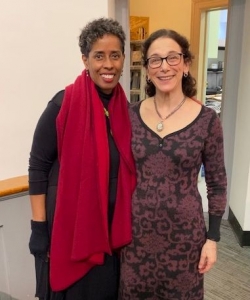 MAD and Bailey Pottery Equipment collaborated to present a special artists’ talk and reception at the conclusion of The Sojourner Truth Life Walk, a day-long event dedicated to the story of Sojourner Truth. Two renowned sculptors were invited to talk about their larger-than-life statues of Sojourner Truth currently underway for placement in New York City’s Central Park and Walkway Over the Hudson in Highland, New York.

Vinnie Bagwell (left), who is from Yonkers, and Meredith Bergmann (right), who lives and works in Connecticut, made their way to Kingston on Saturday to tell their stories of sculpting Sojourner Truth for the Walkway Over the Hudson and Central Park.

The artists’ talk was preceded by a reenactment of the 1851 Women’s Rights Convention held in Akron, Ohio, where Sojourner Truth delivered one of the most famous abolitionist and women’s rights speeches in American history, “Ain’t I a Woman?”. Deborah Zuill, an accomplished thespian, portrayed Sojourner Truth. 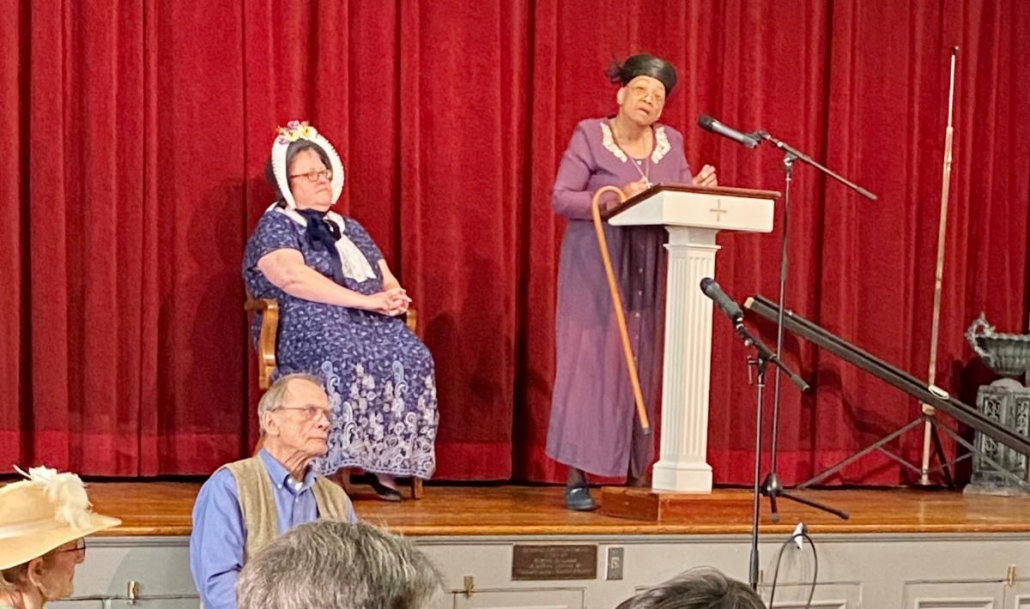 Sojourner Truth was born into slavery just outside of Kingston and walked to her freedom in 1826. She was a leading abolitionist, civil rights activist, and an advocate for women’s voting rights. She was also the first black woman to win a case in court against a white man. Although enslavement had been outlawed in New York by 1827, the man she worked for gave her young son as a wedding gift to another farmer in Alabama, where enslavement was still legal. Through her enormous efforts, she had her son returned to freedom in New York. The court case took place right here in Kingston, New York, in the Ulster County Courthouse.

Thanks to Black History Month Kingston we are learning more about this American hero. Her life was one of inspiration. She spent her long life traveling around the country as a public speaker about human rights, justice, and equality.

Vinnie Bagwell, a self-taught sculptor of enormous talent, spoke of her commitment to public art and its importance in communicating the ideals and traditions of the community where it is placed. The NYS Office of Parks, Recreation and Historic Preservation awarded her the commission to create a seven-foot bronze sculpture of Sojourner Truth to be installed this June on the Ulster County side of the Walkway Over the Hudson. Ms. Bagwell’s sculptures tell complete stories with bas relief details of Truth’s life carved into her skirt. 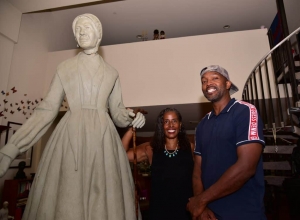 Vinnie Bagwell had a visit in her Yonker’s studio from Sojourner Truth’s sixth-generation grandson, Cory Mcliechey, from Grand Rapids, Michigan!

Meredith Bergmann was the chosen winner by The Elizabeth Cady Stanton and Susan B. Anthony Statue Fund and its Monumental Women Campaign, to create a monument honoring the women of New York who spent their lives working for women’s rights. Ms. Bergmann told us about the research and attention to detail that she adds to her work. A one third size model was carefully carved and then computer-generated foam forms of each full-sized element were delivered to her studio. They were covered in a skin of clay and the final detailed carving was completed. They are now at the foundry being prepared for casting. Their dedication on Literary Walk in Central Park will be held on August 26, 2020, the 100th Anniversary of the 19th Amendment to the United States Constitution, which gave women the right to vote.

We are really looking forward to seeing the two outstanding statues being created by these two artists. We were grateful to them for coming to Kingston to speak. Kingston is a city of artists and their free talk was enjoyed by all. 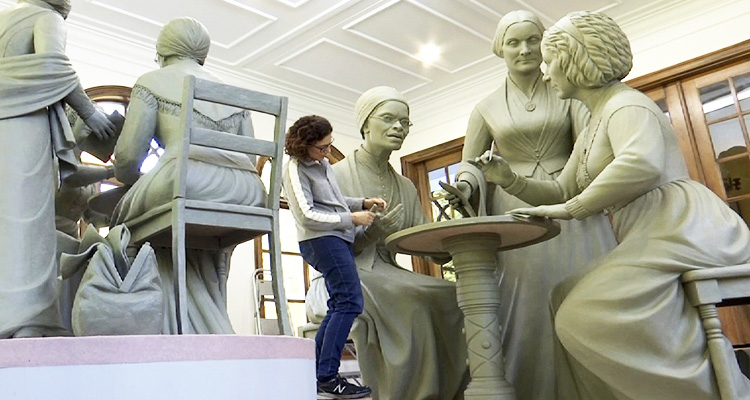 Meredith Bergman is dwarfed by the completed clay-on-foam sculpture before it leaves her studio to go to the foundry to be cast in bronze. View video here.