You are here: Home1 / Featured2 / Call for Proposals

The Covid-19 pandemic has caused an unprecedented crisis in Kingston’s arts community. To help meet the need, this year’s call for proposals for the Todd Samara Art Fund Award will be expanded to include requests for assistance by committed artists in the Kingston community. Now in its second year, the award of $1,200 was originally designed for proposals from emerging and established contemporary artists, art educators, and/or curators for a project to take place in the City of Kingston. While the Todd Samara Art Fund Committee will still consider proposals, the financial need of artists of merit will also play an important role in the decision process. In addition, the amount of funding is flexible and multiple awards may be considered. This opportunity is open to all genres of art practice, including music, performance, literary arts, and video. Applicants must either reside or work in the City of Kingston.

While in the past we required applicants to send a short description of their project, this year applicants may also or instead describe a need related to their art practice they deem worthy of funding, along with a one-page CV and up to eight images or links to videos. In judging creative work of merit, factors that will be considered by the committee include: originality of conception, quality of execution and/or craft, professionalism of presentation and visibility and/or engagement with the community, particularly as it pertains to under-served communities and the education of under-resourced youth. Given the current quarantine, works or a project that can be shared digitally in innovative ways will also be a consideration.

Proposals should be submitted to mail@madkingston.org by July 15, 2020. The award will be announced in September. 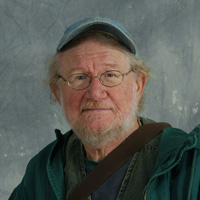 The Todd Samara Art Fund Award was created by the family and friends of Todd Samara in 2018 to preserve his legacy as an artist. For over 30 years, Todd lived and painted in Kingston’s Rondout neighborhood, translating its hilly streets, tight rows of 19th-century gable-roofed houses, bridges and panoramic river views into poetic visions characterized by simplified, textured forms and rich, glowing color.

In 2017 Todd was diagnosed with dementia and placed in long-term care. In deciding how to deal with the hundreds of paintings and drawings Todd left behind, the Samara family arranged for an auction to be held to raise funds that would then be used to benefit other artists in Kingston. The family felt this would be a great way to keep Todd’s presence alive in the community, which played such an important part in his work. The auction was held in November 2018 and raised over $30,000, which has been invested with the Community Foundations of the Hudson Valley. The fund is administered by the Kingston Midtown Arts District (MAD), and a committee was formed to oversee an annual arts award generated from the fund’s interest. In 2019, the first annual award was given to The Matter Digest, which was announced at the MAD annual Celebration of the Arts festival in August.