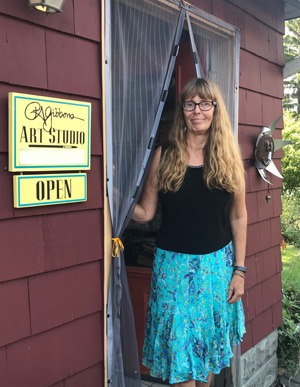 Artist and art educator, Patti Gibbons, is the winner of the 2nd annual Todd Samara Art Fund (TSAF) Award. The $1,200 award was announced by the TSAF Committee, which received seven applications for this year’s award.

Gibbons, a former art teacher at Ulster BOCES, has worked in her Kingston studio for seven years. She uses the space to teach and to create abstract paintings whose vivid color and imaginative patterning and linear design suggest fantastic realms. Her students include special-needs adults and children, and she has also taught workshops in galleries, libraries and other venues with a focus on helping women to find a new voice. Gibbons has exhibited regionally and beyond, and has belonged to several nonprofit art organizations, including the Woodstock School of Art and National Association of Women Artists. This award will allow her to fund a new roof for her studio and pay for heat, both of which will allow her to keep her studio open.

The Todd Samara Art Fund Award was created by the family and friends of Todd Samara to preserve his legacy as an artist. Samara lived for more than 30 years in the Kingston Rondout neighborhood, and translated its hilly streets, tight rows of 19th-century gable-roofed homes, bridges and panoramic river views into poetic visions characterized by simplified, textured forms and rich, glowing color. In 2017, when he was diagnosed with dementia and placed in long-term care, the Samara family held an auction to raise funds from the sale of hundreds of his paintings and drawings. They determined the funds would be used to benefit other Kingston artists as a way to keep Samara’s presence alive in the community. The November 2018 auction raised more than $30,000, which was invested with the Community Foundations of the Hudson Valley. Interest generated from the fund, which is administered by MAD, is used to disseminate an annual arts award in Samara’s name and a committee was formed to oversee the annual award selection process.

The first TSAF Award was given in 2019 to The Kingston Matter Digest, an illustrated news and ideas newsletter written and designed by Ernest Goodmaw and Havarah Zawoluk. The two women printed and distributed two bimonthly issues, as well as a special issue on The Kingstonian, all of which is available at thematterdigest.com.

Gibbons will accept the 2020 TSAF Award at a ceremony held in conjunction with the MAD Red Goat Awards event on the porch and adjacent yard of the Hudson River Maritime Museum on Saturday, September 26, at 5 p.m. as part of the annual Art Walk Kingston. Masks and social distancing will be required. TSAF Committee members Nancy Donskoj and Lynn Woods will present the award, and paintings and drawings by Todd Samara will be on display and available for purchase.